Don’t Auto-Post From One Platform To Another

Auto cross-posting.  It seems so benign. So helpful really. If Facebook has a button that says “Hey! Let me help you out by posting all your posts to Twitter. Think of the time that will save you.” Ok, maybe I’m paraphrasing, but if you are more familiar with Facebook and not so much with Twitter, this probably seems like a life saver. You can sound so cool when you tell your friends you’re active on all kinds of social media accounts. Just don’t let your friends read your feed. I don’t mean to pick on anyone, but if you saw this feed: 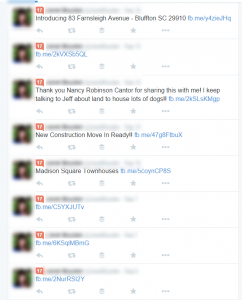 Would you follow this person? Can you figure out what they’re trying to say? Does it look interesting at all? This person would be better off not having a Twitter account because it really is hurting their credibility. Can it be fixed? Yes. But that’s another post.

Do you remember in high school having to choose between Spanish and French if you were interested in learning a second language? Do you remember how both groups thought they were smarter than the other? You probably never saw them at the same parties. Facebook people and Twitter people are a lot like that. So when I see your url starting with fb.com and I’m a Twitter person, well, I’m very unlikely to click on it. Plus, without any other clues to what on earth you’re trying to say, I’m going to quickly scroll on by.

It’s truly worth the effort to get on Twitter live and check out what’s happening there.

On the other hand, on Facebook I saw this recently: 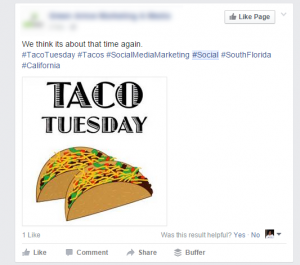 This is not a Facebook friendly post.  Although hashtags are allowed on Facebook, most people find them very annoying. Using one is probably ok, but if you really love using hashtags, maybe Instagram is a better platform for you. Most Facebook fans like that platform because they like complete sentences. A short paragraph that your English teacher could understand.

What I’m trying to convey is that auto-posting in either direction is like speaking to someone in a foreign language.

Did I totally confuse you? Jump onto Twitter and ask me your questions. Be sure to have @AskForLiz in your tweet so I can find you!

This website uses cookies to improve your experience while you navigate through the website. Out of these, the cookies that are categorized as necessary are stored on your browser as they are essential for the working of basic functionalities of the website. We also use third-party cookies that help us analyze and understand how you use this website. These cookies will be stored in your browser only with your consent. You also have the option to opt-out of these cookies. But opting out of some of these cookies may affect your browsing experience.
Necessary Always Enabled

Any cookies that may not be particularly necessary for the website to function and is used specifically to collect user personal data via analytics, ads, other embedded contents are termed as non-necessary cookies. It is mandatory to procure user consent prior to running these cookies on your website.